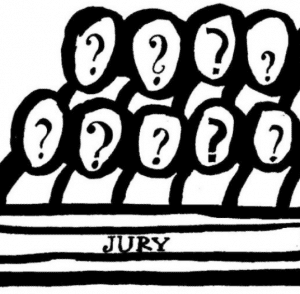 Juries of six to twelve persons are selected from the jury pool. The size of jury varies from state to state and depends to some extent on the type of case at trial.

Alternate jurors are selected in some cases to take the place of jurors who may become ill during the trial. Alternate jurors hear the evidence just as the other jurors do, but they don’t participate in the deliberations unless they replace an original juror.

In many jurisdictions, jury selection begins with the court clerk’s calling twelve people on the jury list and asking them to take a place in the jury box. The judge usually makes a brief statement explaining what kind of case is to be tried and inquiring whether there is any reason the potential jurors cannot serve. The judge or the lawyers then ask them questions as to whether they have any knowledge of the case or have had specific experiences that might cause them to be biased or unfair. This questioning of the potential jurors is known as voir dire (to speak the truth).