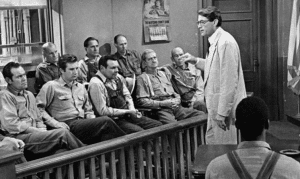 From: How Stuff Works

Why exactly are people randomly picked to serve on a jury? Wouldn’t it be better to let legal experts decide important court cases, and a not a dozen random strangers? Who came up with this system, anyway?

The answer to that last question, like most, is the ancient Greeks. In the groundbreaking Athenian democracy created in 507 B.C.E., all court cases were decided directly by the people. Huge juries of 500 people or more were selected every day from a pool of roughly 40,000 adult male citizens to rule on everything from murder cases to neighborly squabbles [source: History.com.

The Magna Carta, penned in 1215, expressly included the right of every free man to protection from punishment without “the lawful judgment of his peers” [source: Library of Congress]. The 18th-century framers of the United States Constitution believed that a trial by an impartial jury was among the principle rights of any free society. In fact, the Fifth, Sixth and Seventh Amendments to the Constitution ensure the right to a jury in both criminal and civil cases [source: U.S. Courts.

Today, U.S. federal law states that juries must be “selected at random from a fair cross section of the community … wherein the court convenes.” Hence the computer-selected names from a list of registered voters and licensed drivers. The law further states that “all citizens shall have the opportunity to be considered for service … and shall have an obligation to serve as jurors when summoned for that purpose” [source: Cornell University Law School.

These two components of the U.S. jury system — randomness and compulsory service — combine to ensure that a jury is a representative sample of the community regardless of race, gender, political affiliation or ability to weasel out of jury duty.