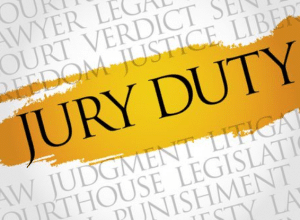 By: Christopher B. Dolan

The following appears in the Examiner. It is a Q & A segment.

A: Dear Bryan: seriously, shame on you. Simple answer, DON’T.

One sure way to get out of being on a jury is to be a criminal defendant. Then you don’t have to sit on a jury and, at the same time, you will hope to God that you will have a group of people who didn’t try and evade their civic responsibility and are willing to sit and fairly hear your case and defense. Another way is become a convicted felon and be deprived of your constitutional rights such as bearing arms, being free from unlawful search and seizure, and the ability to sit on a jury or vote.

The original founders, who fought and died for our independence called the right to a jury a: “A sacred right” …. “the most important privilege which freemen can enjoy”. The deprivation of a right to jury trials was one of the main grievances leading to the Revolutionary War. This right is listed in the Magna Carta,the Declaration of Causes and Necessity of Taking Up Arms (1775) and the Declaration of Independence (1776). So, jury service is not a hassle, it is a sacred duty people died for. It is part of what we are fighting to establish all over the world with our armed forces.

The United States Constitution, in the Sixth Amendment (Part of the Bill of Rights) proclaims; “In all criminal prosecutions, the accused shall enjoy the right to a speedy and public trial, by an impartial jury of the State and district wherein the crime shall have been committed, which district shall have been previously ascertained by law, and to be informed of the nature and cause of the accusation; to be confronted with the witnesses against him; to have compulsory process for obtaining witnesses in his favor, and to have the Assistance of Counsel for his defense.”

The California Constitution Article 1, Sec. 16. states “Trial by jury is an inviolate right and shall be secured to all, but in a civil cause three-fourths of the jury may render a verdict. A jury may be waived in a criminal cause by the consent of both parties expressed in open court by the defendant and the defendant’s counsel. In a civil cause a jury may be waived by the consent of the parties expressed as prescribed by statute. In civil causes the jury shall consist of 12 persons… .” In criminal actions in which a felony is charged, the jury shall consist of 12 persons, in misdemeanor cases the parties can agree to a lesser number.