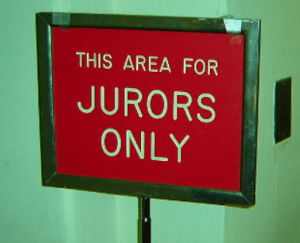 The following is article is by recently retired Judge Jim Jordan in the Dallas News.

I left bench as a trial judge at the end of 2018. Friends and family have begun asking me which case was most memorable, or which had the biggest verdict, received the most publicity or had the best — or worst — attorneys, what was the hardest part of being a judge, or the most rewarding. But as I near the end of my service, in my quiet moments I most often reflect on the jurors who came through my court.

When I began practicing law 40 years ago, Abraham Lincoln could have walked into most any courtroom in America and felt right at home. Not so much these days. But back in the late ’70s, cases were still being tried with many of the same tools Lincoln used — drawings, models, graphs, depositions or written statements made under oath. Sure, videos or film were available back then but they were relatively new or expensive technology for most trial attorneys. Mobile phones, texting, email, PowerPoint and the internet were still mostly Dick Tracy-type science fiction.

When I started, as in Lincoln’s time, successful attorneys possessed heightened verbal skills, an ability to root out lies with piercing cross examination, countless rhetorical arguments at the ready, and a keenly developed sense of human nature. I have read that cases in Lincoln’s day were tried with the same broad, worldly themes found in the works of Shakespeare and the Bible, often the only two books in a 19th century American home.

The Old Testament story of the Joseph, for instance, contains many of these themes — jealousy, betrayal, redemption, adversity and forgiveness. It also closely resembles, in many respects, our country’s origin story — immigration, individualism, foreign powers, reliance on each other, slavery. All put into motion by a simple act of a parent’s love for a child; a coat given to a child for comfort, made of many colors to bring joy.

Jurors come from an astonishing variety of different jobs, neighborhoods, ethnicities, education, ages and backgrounds. Some wealthy, many struggling, an occasional celebrity but mostly everyday American citizens who were summoned away from their daily lives, jobs and families to peacefully and fairly resolve disputes for fellow citizens they have never met. For many it’s also a rare opportunity to explore experiences, opinions and even family traditions with people very different from themselves.