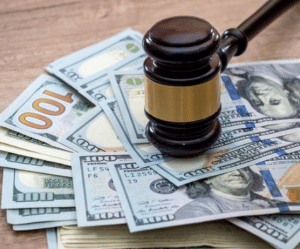 Man oh man, people got all in a huff when McDonald’s jumpin java scalded Stella Liebeck and the jury awarded her almost $3 million dollars. But, Liebeck isn’t the only one that seems to be benefiting from generous jury verdicts.

Get a gander at some of the whopping verdicts juries have been awarding in the past few years:

The largest jury verdict actually may have put Imelda Marcos’ shoe collection in jeopardy. In 1996, a jury awarded treasure hunter Roger Roxas $22 billion for a golden Buddha statute and bars of gold bullion he claims the deceased dictator stole from him. A judge pumped up the award to $40.5 billion by adding interest into the mix. Quite a bit of booty….

This treasure hunter’s story is actually sort of a fairytale or rather a nightmare, depending on your perspective. Roxas tunneled for months searching for treasure a buddy told him was buried eons before. But, he finally found it in the form of a golden Buddha statute that was chock full of diamonds and bars of gold bullion.

As the story goes, Marcos got wind of the discovery, and like any reputable dictator, had Roxas arrested, jailed and tortured and then pocketed — so to speak — the purloined prize.

A jury believed Roxas’ story, even though the plaintiff couldn’t tell it himself — he mysteriously died the day before the trial opened. The Hawaii Supreme Court however said the jurors must have punched the wrong keys on their calculators and set aside the verdict, ordering a new trial for the purpose of recalculating the booty balance sheet. That was back in 1996 and the estate of Roger Roxas has yet to see a dime of the decision.

Even though the Hawaiian high court felt the jury in the Roxas case didn’t use the cold hard facts to come to a proper conclusion, they at least had something tangible to measure.