Skip to content
Juror Calling > Legal News > Education > What is the Juror Bill of Rights? 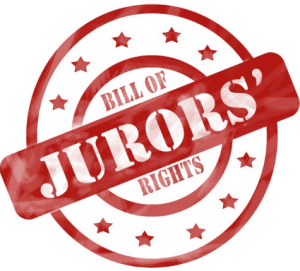 In trial courts across America, jurors are skipping jury duty. One third of citizens in major California counties like Los Angeles and San Diego fail to serve. In Texas, the two counties surrounding Houston, Harris and Montgomery County, have had no-show rates of 75 percent and 86 percent, respectively. In Philadelphia, 200,000 of 600,000 citizens failed to show up, leading city officials to create a “scofflaw court” for recalcitrant jurors. And in Idaho, Florida, and North Carolina, the “no-show” problem continues to frustrate local courts.

Juror apathy degrades justice. In Youngstown, Ohio, and Natchez, Mississippi, judges had to postpone murder trials because not enough jurors showed up to serve. Meanwhile, citizens who do appear face an additional burden, as they are summoned more frequently than if the duty was equitably shared.

How can courts address this civic apathy? Federal Judge Mark W. Bennett, a 20-year veteran of picking juries has an idea: a juror bill of rights.

In his Arizona State Law Review article, “Reinvigorating and Enhancing Jury Trials Through an Overdue Juror Bill of Rights:  WWJW—What Would Jurors Want?—A Federal Trial Judge’s View”, Judge Bennett proposes a jury-centric approach that spans everything from cup-holders for jurors’ drinks, stretch breaks, and fresh baked cookies, to substantive legal changes like clear jury instructions, interim summaries of arguments, and the elimination of most of the lawyerly gamesmanship that interferes with the timely administration of trials.