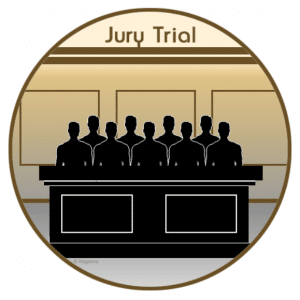 1. The American jury trial is a constitutional right. The founding fathers believed
that the right to be tried by a jury of your peers was so important that it merited inclusion in
the highest law of the land. Amendments 6 and 7 of the Bill of Rights contain this right:
Amendment VI
In all criminal prosecutions, the accused shall enjoy the right to a speedy and public trial, by an impartial jury of the State and district
wherein the crime shall have been committed, which district shall have been previously ascertained by law, and to be informed of the
nature and cause of the accusation; to be confronted with the witnesses against him; to have compulsory process for obtaining witnesses
in his favor, and to have the Assistance of Counsel for his defence.
Amendment VII
In Suits at common law, where the value in controversy shall exceed twenty dollars, the right of trial by jury shall be preserved, and
no fact tried by a jury, shall be otherwise re-examined in any Court of the United States, than according to the rules of the common law.

3. The founding fathers included jury trials in the constitution because
jury trials prevent tyranny. The definition of tyranny is oppressive power exerted by
the government. Tyranny also exists when absolute power is vested in a single ruler. Jury trials
are the opposite of tyranny because the citizens on the jury are given the absolute power to
make the final decision.